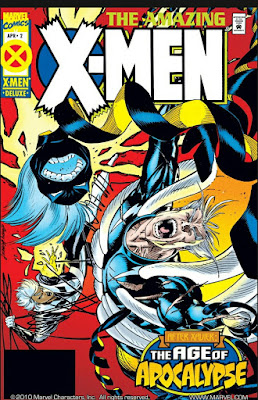 Written by Fabian Nicieza
Art by Andy Kubert
Inks by Matt Ryan
Lettering by Richard Starkings & Comicraft
Colors by Kevin Somers/Digital Chameleon
Continuing from Issue 1 we are introduced to a new mutant character called Abyss.  An evil mutant composed of some black ribbony substance. He has found a lonely human child that was hiding and was part of the evacuation group heading to Eurasia. Abyss grabs the child and absorbs him into the center of his ribbons. 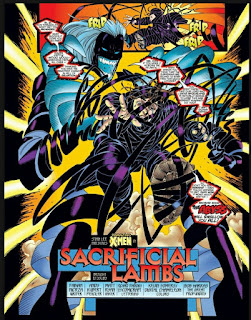 We then cut to the main group of the story where we find that the cloaked figures from the previous issue are in fact this world's Brotherhood of Mutants and are a religious group of mutants that see Apocalypse as a god. 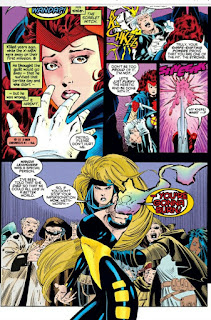 They had managed to take over the sentinels and set them on our Heros. A short battle ensues until the weather goddess, Storm shows up and uses her lightning to short out the sentinels electronics.  Of course his causes the Brotherhood to hightail it out of the battle zone.  As the group recovers from the attack we see Banshee flying over the area looking for where the Brotherhood ran off to.

He spots the transport that the Brotherhood used to arrive at the scene and discovers their lead the Madri dead and hanging upside down in the doorway. Curious as to what happen Banshee discovers Abyss the newest Horseman of the Apocalypse. Instead of fighting Banshee, Abyss tells him; I want Quicksilver and I have a human child here and will kill him if he doesn’t show up.  Of course Banshee takes off to relay the message.

Upon his return to the X-men, Banshee discovers that all the humans are suffering from a psionic attack from Abyss. He quickly tells Quiksilver about Abyss and his demand to face him.  Of course Quicksilver and Storm take off to face the monster. 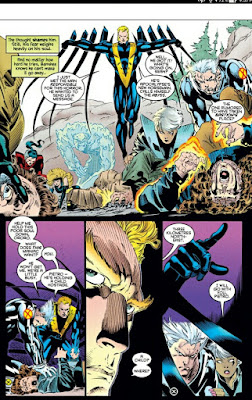 Once at the transport they see that it is a trap for them and they spring the trap and fight Abyss.  Quicksilver manages to defeat the Horseman and send him to some dimensional void that was part of Abyss’ power set.

The two X-men get the human child back to his parents and we see that the other x-men have fixed the Sentinels and are starting to load up the transports to get the rest of the humans out of America. Yeah happy ending.

That is until we cut to Apocalypse in downtown Manhattan where we see Karma being interrogated by two of Apocalypses cronies to learn the exact location of Magneto and his X-men.  Apocalypse then enters the scene. 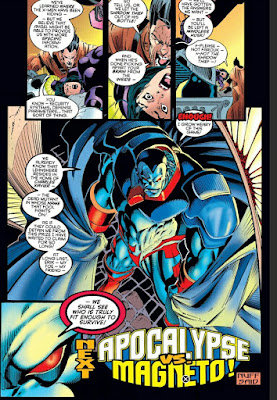 He reveals that he knows where the X-men are hiding and plans to attack them at the former home of Charles Xavier.  Next issue Magneto vs Apocalypse.

The art. What can I say about it. Andy Kubert is part of a dynasty of comic Artists and I really cannot nit pick his style as he is one of the top artist ‘s I think of when it comes to x-men artists. He pretty much picked up the pencil for the X-men from Jim (Slow mo) Lee left Marvel.


The story was a little lacking and felt rushed with a resolution with Quicksilver and Abyss. We didn’t get much in the way of backstory between these characters as it was hinted that Abyss knew Quicksilver. Plus Fabian tacked on hint at a possible romance with Storm, just seemed a little forced.  I did like how the end of the story sets up the next chapter in this run of comics.