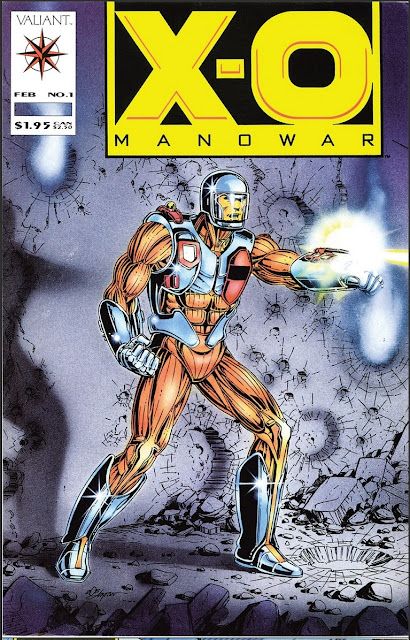 Open With:
A naked bearded man is fighting Spider like Alien Creatures with some makeshift axe. The dialogue is of the man’s thoughts which gives us a little background to his situation  as he fights and kills all the spider aliens near him. His thoughts are rather primitive to modern day thoughts, he sees the aliens weapons as creators of fire light. 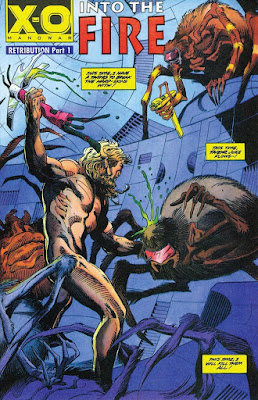 Also we learn that his name is Aric and the creatures he is killing are afraid of something within the center of their home. Well from Aric’s point of view it is there home but in the story we learn it is their spaceship.  Aric moves his way through the ship using a map that is carved on his hand. His thoughts let us know that he received the map from a person called the map giver. 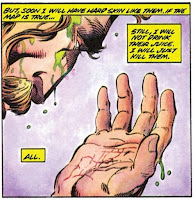 The map leads Aric to a chamber that is holding an Alien suit of armour.  Aric looks over the suit and sees a small ringlet in the chest plate and slips his finger into it. The armour envelopes him, at the same time another spider alien comes into the room and blasts at Aric.  The suit protects Aric from the phase blast and Aric and the Armour react by blasting the Alien through the sall with an energy blast form one of its arm cannons. 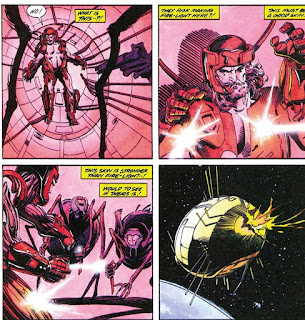 The spider alien is not only blasted through the wall but also out the ship into the void of space.  Aric is impressed and the armour takes of in flight and Aric flies out the hole to see that the “house” has a vast open space. To the readers more modern eyes we can also see that the ship is in geosynchronous orbit around earth.
Now outside the spacecraft, Aric starts to receive blaster fire from the ship as the aliens attempt to destroy Aric and the armour.  To defend himself and stop the ship; our hero thinks about tearing off the blasters of the ship. With the armours help he manages to blast the ships guns off the vessel with devastating effect.  The spacecraft explodes ns the shockwave send Aric sailing towards earth. Gravity grabs a hold of him and sends him falling to the surface.
Cut To:
On a snow covered mountain Aric lands on his back and the suit is unharmed in the reentry of our hero.  Aric the takes off the X-O armor and walks away from it. Aric apparently walked down the mountain stark naked and happens upon a small village.  The people there speak spanish, but Aric can’t make sense of it. Our hero makes his way to a picnic table to sit down, some locals give him food, and clothes. 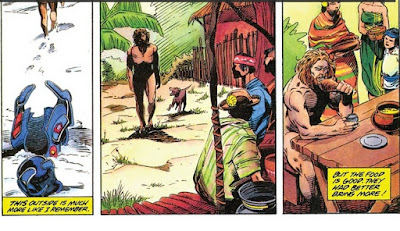 Cut To:
New York, inside the chrysler building. Three individuals are talking about the events that transpired on the Alien Spacecraft. They appear to be agents of the Spider Creatures working on earth.  They debate as to what should be done to get back their armour they call the x-o suit.

Back at the Village:
Aric now fully dressed is gathering up banana bunches,  when a young woman and her son walk up to him. Although he doesn’t speak their language, he has learned how to say her name. Aric also thinks about how long he has been gone and how long it has been since he has been with a woman,  oddly enough he thinks he has only been gone for 10 days. 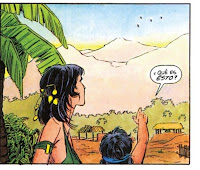 While he contemplates sleeping with the woman, a jeep pulls up with two other villagers. They ask Aric if he needs a lift to town.  He agrees and leaves the woman and boy; and in the background the young boy see dark specs in the horizon. The boy is unsure about what he sees and asks Mariah her opinion.
Later:
In the town, Aric is seeking a wizard to help him get back home. When the young boy from the village runs up to him telling him that something bad has happened back in the village. Aric still doesn’t understand him, but he understands the tone of the voice to run off and see what happened.
At the village, Aric finds several people dead and the woman, Mariah’s head on a spik. In her hair is and alien communication device. A voice tells him to take off the ring and walk away.  Aric knows now that they fear him and the armour. The ring calls to him to head north where he can get the Armour back. So he starts walking north leaving the village to deal with it’s own death.
Cut To:
Massachusetts, where one of the spider aliens in human form by the name of Lydia arrives at a warehouse and wants to know why the “primitive” is still alive?  We learn that they have the X-O armour back but they are having issues keeping the armour. Lydia thinks up a scheme to get the ring back.
Back in Peru:
Aric is working his way through the jungle in northerly direction, he comes across more Spider Aliens along the way and manage to acquire one of their blasters. As he moves closer to more populated areas, he comes across an armory and stronghold of the spider aliens. Using their own weapons, Aric destroys the base. 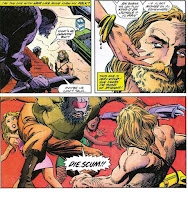 Soon he comes across a larger town with apartments, stores, and the like. As he walks through the city once again naked he is propositioned by two women of the night, aka prostitutes. Before he can think about spending an evening with them a spider alien takes from above him and the two of them wrestle.  Aric manges to fight the Alien and snap it’s neck. However the creature managed to bite Aric. As he drops the dead alien he checks to make sure it isn’t one of the poisonous ones. Being on the creatures ship, he has learned which ones bear the poisonous markings. Thankfull,y he sees that it is not a poisonous spider.

Just then we hear a voice from off panel and are introduced to a new character by the name of Ken.  Ken tells Aric he should come back to his place, so that he can patch up Aric. Of course Aric is unsure about Ken , but follows him anyway.  Once at Ken’s apartment, Aric gets cleaned and and Ken sets up a place for Aric to sleep in the living room.
The next morning Ken goes into the living room to check on his new lodger, when he finds Aric hiding behind a potted plant.  Ken realized that Aric must be in some serious trouble and appears to be reacting to someone being hunted. So Ken comes up with a plan.
Cut To:
An Airport outside the Peruvian city, where Aric and Ken are walking into the terminal. Aric has been cleaned up and is minus his beard, and is wearing a new suit.  The two board a plane for New York, and Ken makes some small talk on the plan.

Ken notices Arics ring and makes a comment about it; and Aric shouts down the comment before Ken can make a suggestion of wearing it himself.  The rest of the flight is uneventful and the plane lands safely in New York.
In the terminal, Ken tells Aric he has to make a call and not to go anywhere ae he will be right back.  The phone call that Ken makes is to Lydia and we find out the Ken is an agent to the spider aliens.
Once Ken returns , our tall barbarian can feel the pull of the Armour as he is getting closer north. Aric tries to say goodbye to his new friend, but somehow Ken manages to convince  to continue to join aric on his quest. 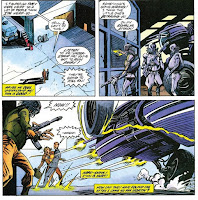 The two exit  the Airport and as they leave, Ken Reveals how he got mixed up with the spier aliens and that he is truly sorry. Ken tells Aric to run, but just then a spider alien attacks them both. Aric manages to get them to some cover, but not before Ken’s arm is blasted off.
Aric knows he needs to defeat these creatures quickly in order to save Ken’s life. The soldier's accidently blow up a gas truck near Aric and assume that he has been destroyed.  However, Aric is very much alive and very much pissed off. He thinks to himself that he can’t go any further north and he really needs his armour. He wonders if the armour can hear him like he hears it.

Lydia and Aristedes, the two human looking spider creatures watch as the x-o armour breaks free of the energy prison and curls into a ball and flies off out of the warehouse. 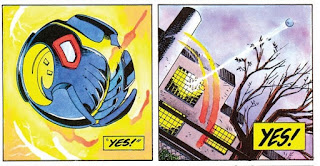 Back at the Airport:
The armour arrives and bonds with Aric once again and X-O Manowar Devastates the spider soldiers.  After the battle Aric flies off with Ken to a remote area to try and figure out a way to help him. 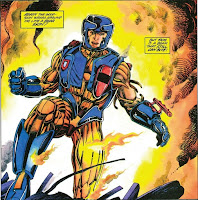 Aric uses the time to think that with his Armour, what he calls his “Good Skin” he is the strongest person and he can rule this new found land. 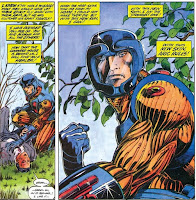 THOUGHTS ON THE STORY:  The story is a decent introduction to the characters. However, we only know that Aric is a primitive. Perhaps in the future issues this gets fleshed out.
ART:
Barry and Bob’s art are very complementary with each other. Barry’s figures and facial layouts are really good. My only con is some of the panel layouts seem decompressed. 6 to 8 panel grids could have been condensed to four or even two.